Maps designed by J.L Carr and published by him at 27 Mill Dale Road, Kettering


Carr's maps were not intended for navigation, they were designed to relate buildings, people, animals, events and even recipes to places in England and Wales. The places were within the boundaries of the old 39 counties of England, so before 1974, or in England and Wales together. Carr included Wales alone perhaps because he was named after a British Prime Minister of Welsh descent, David Lloyd George. Carr also designed and published a map of Beadle County in South Dakota. This makes a total of 42 maps of geographical areas, 28 of which are known to be issued in more than one design, including seven maps of Northamptonshire, his adopted county, and eight maps of Yorkshire, his county of birth.

Carr reported that he designed his map of England and Wales (see left) while he was stationed at R.A.F. bases in West Africa during World War II. Carr was in 270 Squadron, an aerial reconnaisance unit searching for German submarines off the coast of West Africa.

In his History of the QTP (1987) Carr stated the current version of the map of each county, but more editions of some are known, and he left out Buckinghamshire and Westmorland from his list. Carr also reported in his History that he had produced three maps of Derbyshire, Lincolnshire and Rutland, but only two have been seen of each of these counties. Carr reported two maps of Surrey but only one has been seen. If the maps were simply reprinted, then the impressions may be indistinguishable.

Carr's series of maps of the 39 historic counties of England was started in 1966 and completed 10 years later with a map of Westmoreland, issued in December 1976, an event that Carr noted on the map. 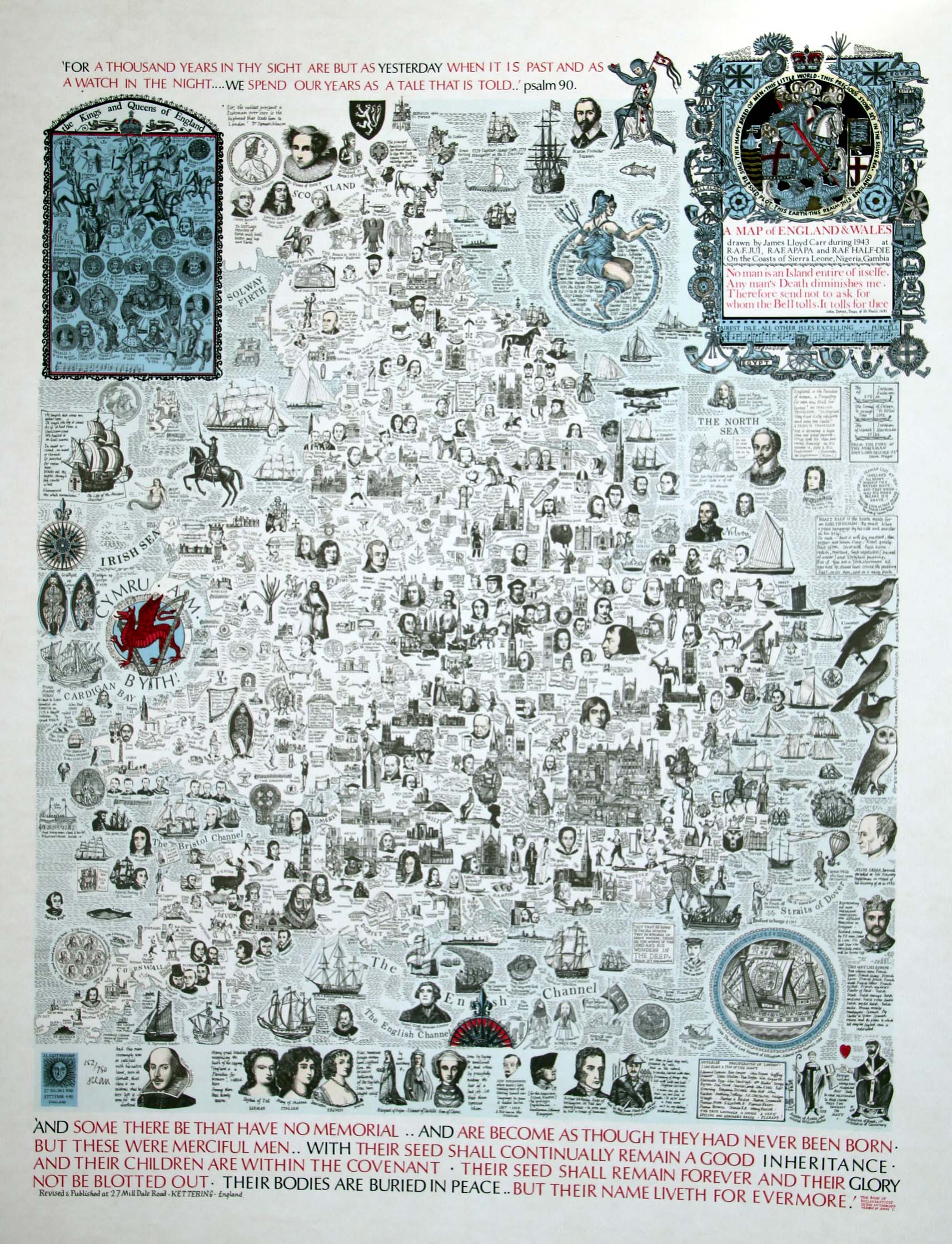 
The counties of England were reorganised in 1976 when several disappeared, including Cumberland, Rutland and Westmoreland. This re-organisation of counties may have been good for sales of maps, particularly for counties that ceased to exist. The last maps that Carr designed were issued in 1982, although he reissued a map of Northamptonshire in 1987 to help raise funds for local churches.

Many maps were issued first as rough proofs, marked as such at the margin, printed on thin paper and usually not coloured. These were sent to potential sellers for them to see before they ordered the map.

According to a note from Robert Carr, some of the limitations correspond with the year in which the map was published so, for example, there were 982 sheets of a map published in 1982. A list of years and limitations is given here. Carr usually added the proof number by hand in front of the printed limitation and signed the map. Almost all maps were issued in limited editions of between 250 (Suffolk 2) and 982 (Yorkshire 7) sheets, with an average of about 700. A few maps have no limitation, such as maps of Wales, Warwickshire (1), Norfolk (1) and Sussex (2). Early maps tended to have smaller limitations than the later maps, probably reflecting the fact that he could sell more.

Many of the early maps were coloured by hand by Sally Carr, so maps may differ slightly. Later maps were printed in colours.

In his History of the QTP (1987) Carr acknowledged help from Michael Adcock, Alan Godson, Trevor Herbert and Ian Wills.

According to Carr's History of the QTP (1987) the maps were mostly printed by Harry Richardson or by Seddon Packaging and Printing. Only one map so far has been seen which names a printer: the second edition of the map of Essex was printed by the Dalkeith Press of Kettering.

Fifty four maps were allocated an ISBN, but no map has been seen with such a number printed on it. The maps are usually listed in a ISBN search as an 'Architectural and Historical map' or as a 'Map - Folded Map'. Presumably there was no category of map not made for the purposes of navigation, but to be framed.


Maps in public or university collections

The British Library has a copy of the first map of Northamptonshire, a longsheet designed in 1965, which was probably sent by Carr with the book of poems by Robert Bloomfield; five maps all accessioned on 1st October 1971, of Essex, Huntingdonshire, Sussex, Wiltshire and Yorkshire, probably also sent by Carr; and a copy of the 1972 map of England and Wales. The British Library also has a damaged proof of a map of Warwickshire accessioned June 1971; it is in two pieces.

The National Library of Wales has two copies of the first edition of the map of Wales, issued in 1969. It also has a pictorial map of Wales in red ink on green wrapping paper dated [1969], which may be an original design. It has not been seen.

The public library in Kettering had 35 maps and 24 proofs of maps of: Bedfordshire, Berkshire, Buckinghamshire, Cambridgeshire, Cornwall, Cumberland, Derbyshire, Devon, Dorset, Durham, Essex, Gloucestershire, Hampshire, Herefordshire, Hertfordshire, Huntingdonshire, Kent, Lancashire, Leicestershire, Lincolnshire, Middlesex, Norfolk, Northamptonshire, Northumberland, Nottinghamshire, Oxfordshire, Rutland, Shropshire, Somerset, Staffordshire, Suffolk, Sussex, Westmorland, Wiltshire, Worcestershire, Yorkshire, England &, and Wales. These maps were seen once in Kettering, but they have been removed, perhaps to the County Archive, though they are not listed on the Northampton County Council Library catalogue. It's sad they are not still in Kettering as they have the best collection of Carr's small books in the U.K. and map drawers to store them safely.

The US Library of Congress has a proof of the map of Devon and there is a copy of the final map of Devon in the Family History Library in Salt Lake City.

A list of all known or supposed maps can be found here: table of maps.