J.L. Carr was basically a self-taught artist other than lessons from Alice Gostick at Castleford Secondary School and perhaps some help from Betty Minkel, the art teacher at Huron High School. His first known published drawings appeared in 1951 in the Birmingham Weekly Post and in the Midlands Club Cricket Conference Yearbook. He painted pictures while he was in Huron in 1957/57 and left some to the High School (which I bought when they were raising money for their library). He left his sketch books for The Old Timers to the Dakotaland Museum in Huron.

Between 1960 and 1964 in winter (when there was no cricket), Carr borrowed Arthur Mee's book on Northamptonshire and planned circuits of buildings which Mee claimed to have notable architectural or historic merit. These were usually churches, where he painted details of the steeple and font, but he also painted views across the bleak winter landscape and then finished them off in paints at home in the back bedroom on a Sunday morning. Initially he used the same powdered paints that his school-children used in their art classes, which were mixed with water, and later used acrylic paint, sometimes applying it straight from the tube with his finger and a tissue when he had forgotten to take brushes with him. Carr's hand-written, mimeographed list of pictures in what he called The Northamptonshire Record numbers 385 buildings, places or items, but there are more paintings in the final version, which consists of seven bound volumes of pictures held by the Northamptonshire County Archive. 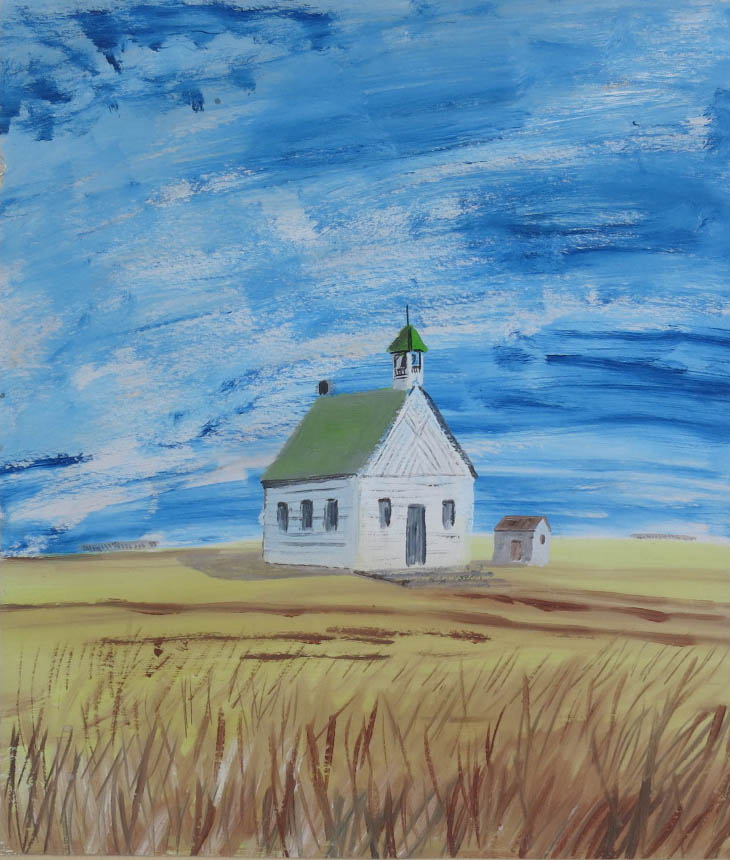 A painting of a rural schoolhouse near Huron, South Dakota, 1956.


Carr drew many of the buildings and figures on his illustrated maps of England, Wales and the 39 old counties before they were reorganised in 1974, and he designed the cover of many of his small books. He also recovered lintels of Weldon stone, a Lincolnshire limestone, from demolished buildings and carved them into figures to decorate his back garden and, in three notable instances, to replace figures that were destroyed during the reformation in his local church in Kettering. Carr painted a picture of Weldon quarry in 1960 (NR32) and wrote beneath it: From this hole was gouged half of Kings College, Cambridge.


The least well known aspect of J.L. Carr's artistic activities is his metalwork. In a interview with Arnold Peters of BBC Radio Northampton in 1990, Carr described how he had moved from Southampton to Birmingham in 1936 ‘to improve himself’ and did a 3-year course in silversmithing, presumably at evening classes while he was teaching. He probably studied at the Birmingham School of Art where one of his teachers may have been the expert silversmith, Bernard Cuzner (1877-1956), who was head of the department of metalwork from 1911 to 1942. Mr Cuzner is named in Carr's novel What Hetty Did.


I have added all that I know on the linked pages, below. If you know more, please let me know.