Chris Fiddes was born in Northamptonshire in 1934 and lives there still. He met JLC at an exhibition of his paintings in the late 1960s. Carr was interested in a painting of a gamekeeper's gibbet - a tree strung with vermin that had been shot by a gamekeeper. It was already sold but Carr bought other paintings by Fiddes and they stayed in touch. Fiddes was then living in the village of Cogenhoe, about 25 km south of Kettering, where he was restoring an old cottage, now marked with a plaque. Fiddes was teaching art at Northampton Girls School.

Chris Fiddes is still drawing and painting but the planned exhibition in Northampton of his latest work has been postponed, probably until 2021. Nineteen examples of Fiddes' oil paintings can be seen at the website of Art UK. 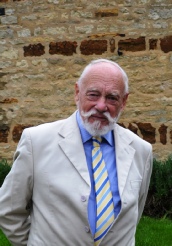 The titles that Chris Fiddes illustrated for Carr are listed below.

If I have missed any, please let me know.