The first colophon (below left) was reproduced in the book of poems of Robert Bloomfield, published in 1966. It is the basis for the sun face colophon dated 1964, but probably designed later, used on many small books (shown second from the left, below). Carr had actually published his first small book in 1964, of the poems of John Clare, but it did not contain a colophon. The second edition did. Carr didn't establish the Quince Tree Press until 1966.

The typical sun face colophon has Carr's name as publisher at the top and his address and telephone number underneath. Carr usually gave his telephone number in early books, but dropped it in later editions and gave only his address, probably when the telephone numbers changed to add more digits for area codes, and he printed his name and address separately. A few small books show only half the sun face, when space was tight, such as Wellbourn's Dictionary.

The sun face is reminiscent of the plaque used to show that a house had fire insurance from the Sun Fire Office, which was founded in 1710 as a result of the press for buildings' insurance after the Great Fire of London in 1666.

The alternative colophon depicted Carr's house in Mill Dale Road, Kettering. It shows the quince tree in the front garden and two people in the bay window bedroom, perhaps Carr and his wife Sally, and a smaller figure, perhaps their son Robert, in the other front bedroom. These colophons are shown below. 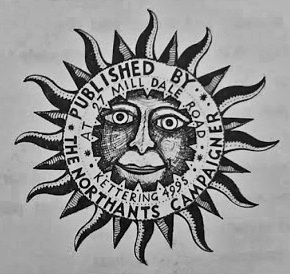 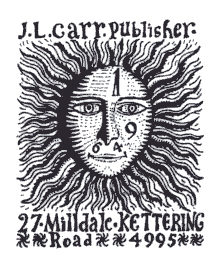 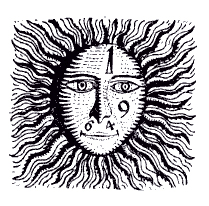 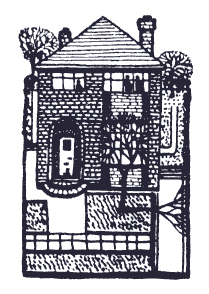 Colophon designed by Edwina Ellis and used inside the rear cover of her small book of engravings.