Some bookplates designed by Stephen Gooden

Stephen Gooden (1892-1955) was an artist and engaver, mainly on copper. I have proofs of 29 of the 43 bookplates that he designed, which are shown below in chronological order. I have also created a list of his bookplates, with a link to an image of each plate, if I don't have it and can find one.

Goodens' designs for bookplates issued before 1944 are reproduced in the book by Campbell Dodgson, The Iconography of the engravings of Stephen Gooden (Elkin Matthews, London). I know of no complete catalogue of his bookplate designs, but there may be one.

All bookplates shown below are in proportion to each other based on the dimensions of the plate if there is a plate mark, or the size of the image if there is no plate mark.

Signed: SG at base of right column

Notes: This is Gooden's first bookplate design, done for a man named John Napthali Hart (1881-1963). J.N. Hart was awarded a CBE in 1955 for political and public services in Enfield. He wrote books on growing roses.

Notes: This bookplate was for Sir Stephen Lewis Courtauld (1883-1967), a philanthropist. 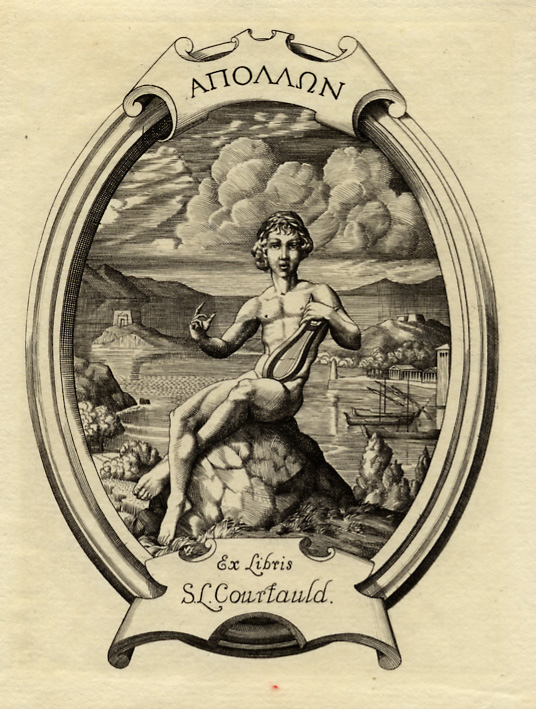 Notes: Sir Geoffrey Keynes was a surgeon and long-time supporter and friend of Stephen Gooden. Keynes commissioned the bookplates for the Royal College of Surgeons (see below).

Notes: Lady Dorothy Moulton Mayer (1886-1974) was a contralto who, late in life, wrote biographies of Louis Spohr (Widenfeld & Nicholson, 1959), Louise of Savoy (Weidenfeld & Nicholson, 1966), Marie Antoinette (Weidenfeld & Nicholson, 1968) and (published posthumously) Angelica Kaufmann (Colin Smythe, 1978). In 1919 aged 33 y, she married Robert Mayer (1879-1985) a German musician and industrialist, who became a naturalised British citizen. Dorothy and Robert established concerts of classical music for children before the Second World War that proved very popular. They had two children, a son (b 1922) and a daughter. Dorothy died aged aged 88 y in 1974; Sir Robert married again aged 101 y and died aged 106 y. I found this bookplate in a limited edition of the Collected Poems of John Drinkwater (Sidgwick & Jackson, 1923), which he inscribed to Dorothy with lines of his verse.

Notes: Antoinette Heckscher (1884–1967) was an American who married Oliver Sylvain Baliol Brett in 1912. When her husband's father died in 1930 he became the 3rd Viscount Esher so she changed the bookplate to give her new name. Lucky his name wasn't Northumberland or something long.

Notes: The bookplate is for Harold Thomas Hartley (1851-1943), a businessman and bibliophile.

I can find only one citation of the phrase 'The Pursuing Conscience' (other than this bookplate), it is from The Peer and the Blacksmith (1845) by Richard Beddingfield: It is to fly the pursuing conscience that the wicked rush into sin.

This is one of the few plates by Stephen Gooden that he signed in the engraving. The description on the British Museum website says that is based on two heads after Simeon Solomon, and it is initialled and dated 'SS 1894' in the image.

Notes: Margaret Griselda Wedderburn (1888-1987) was married secondly to Bertine Entwistle Sutton, who also had a bookplate designed by Stephen Gooden. She had five children with her first husband, Stuart de la Rue, who died in 1927 aged 44y. Two of her sons, Christopher and Patrick, died within 5 months of each other in 1939, aged 23 and 18y, before the Second World War started.

Notes: This bookplate is for George Courtauld V (1903-1980), great-great grandson of the founder of the company Courtaulds, a textile manufacturer, related to Stephen Courtauld (see SG B5).

SG B18: The Lakeside Press Library

Notes: The Lakeside Press was a publisher in Chicago, Illinois

Notes: John Raymond Danson served in both World Wars and was a collector and benefactor.

Notes: This bookplate was for Liverpool Medical Institution Library, which was founded in 1779.

The snake wound around a stick is the Rod of Asclepius, an ancient symbol of medicine believed to represent the means of removing the nematode worm Dracunculus medinensis through the small abscess, usually on the lower leg, through which the female worm releases its larvae into water. The worm needs to be removed slowly, otherwise it could break and cause inflammation, so it was wound around a small stick and every day more of the worm was pulled out. By the way, my first career was as a Parasitologist.

Notes: This medium bookplate was first designed for King Edward VIII with a Royal cypher at the top, but he abdicated, so it was modified for King George VI. This version has no royal cypher, so is probably later.

Notes: This large bookplate was first designed for King George VI. This version lacks the initials G R, to the left and right of the crown, and the Roman numerals VI within the letter G to the left, which is reported by Dodgson to be the final version. However I suspect that this version is the seventh and final state, with no cipher.

Notes: William George Arthur Ormsby-Gore (1885-1964) was a Conservative politician and Secretary of State for the Colonies between 1936 to 1938, the year he inherited his title and the year he commissioned Gooden to design a bookplate for him. At the top is part of the family crest, described as: a Dexter Arm embowed in armour proper holding in the hand a Man's Leg also in armour couped at the thigh.

The father of the first Lord Harlech was born William Gore in Ireland in 1779. In 1815 he married Mary Ormsby, an heiress, and added her family name to his to become Ormsby-Gore.

The bookplate is initialled 'SG' in the scroll, lower right. Click on it to see it in more detail.

Notes: Ethel Luce-Clausen was a friend of Mona Gooden who worked at the University of Rochester, New York, and was an expert on rats. She asked Gooden to draw an animal, but not a rat. Gooden apologised and said 'the rat crept in when I wasn't looking.

SG B30: The British Council

Notes: In 1934 the British Council for Relations with Other Countries was established to promote British culture abroad, a name that was shortened to British Council in 1936. In 1940 it was granted a Royal Charter, and in 1941 gained a coat of arms and this bookplate.

Is there a penis sticking out of the groin of the lion on the right or am I imagining it?.

SG B35: City of Liverpool Public Libraries, large plate, with Presented by

Notes: The main library in Liverpool is now called Liverpool Central Library. The Liver bird on the plate is represented as a Comorant with laver seaweed in its bill. The box to enter details about who the book was presented by has a separate plate mark.

Notes: This bookplate was for designed by Gooden for Princess Elizabeth in 1946, when she was 20 years old, so before she became Queen. My copy is a trial proof on a sheet of thick wove paper, which is often used by engravers to check their designs, about 355 x 190 mm. It is not listed in Dodgson (1944).

I suspect that Stephen Courtauld (see above) may have been instrumental in commissioning this bookplate. In 1951 he moved to Mutare in Southern Rhodesia where he lived for the rest of his life and where he was a notable philanthropist. I suspect that he had been to Rhodesia before he moved there.

Notes: This is only known from a reproduction, bought in the sale of John Deacon, son of a collector of Gooden's work and a collector himself. It has the same dimensions as the engraved plate of the Central African Archives and the same design except that the two shields are missing and the title shield at the top is shorter, as there are only four lines in the title, not five. I wonder if it was a trial or abandoned design, as the shield with pick axe and scrolls beneath are probably specific to the institution. Perhaps the plate was designed before the Central African Archive was a created, when it was known as the National Archives?

Notes: This proof of the bookplate is gummed.

This bookplate was for the Chairman of Peter Spence & Sons, industrial chemists and importers of alum. The Centaur is standing on a crystal of alum. A similar design of a female centaur on a crystal of alum, was used as a tailpiece in a book The Earliest Chemical Industry by Charles Singer published by the Folio Society in 1948 in two formats: numbers 1-100 were hand-bound in red morocco by Sangorski and Sutcliffe, signed by the author and Derek Spence; and numbers 101-1100 were numbered and issued in red cloth.

I have a drawing by Gooden of a male Centaur on a crystal, which may be a trial design for this endpiece.

Notes: The Royal College of Surgeons is a professional body that regulates surgery. The designs for this plate were presented to the RCS by Sir Geoffrey Keynes, who also had a bookplate designed for him in 1926 by Gooden.

Notes: The Royal College of Surgeons is a professional body that regulates surgery. The designs for this plate can be seen here.

Notes: This is the largest of three plates for the books of Urban Huttlestone Rogers Broughton, Lord Fairhaven (1896-1966).

Notes: This is the medium plate for the books of Urban Huttlestone Rogers Broughton, Lord Fairhaven (1896-1966).

Notes: This is the small plate for the books of Urban Huttlestone Rogers Broughton, Lord Fairhaven (1896-1966). The house Park Close is now called Windsor Court and is for sale at about £16 million.