Advertising materials by Edmund Blampied or using his designs


Very little advertising material has been found. That's probably because only a few titles of magazines and no newspapers have been searched specifically for adverts, they have mostly been searched for Blampied's illustrations. A few advertisements have been found coincidentally, for Ciro Pearls and Pears soap, and they are listed here. There may be others.


For some unknown reason the images on this page do not show in Firefox. I have no idea why, because Firefox can show them when I load the html file on my computer, but not when I load it from the web host. They show in Chrome and Microsoft Edge, so it's a Firefox problem. Sorry. Try using another browser.

Notes: This advertising poster was sold at an auction in South Africa. I only have an image of it. The fact that it is signed 'E. Blampied' rather than just with his surname suggests that it is early.

Wood-Milne was primarily a rubber company, making rubber heels for shoes and then rubber tyres for bicycles and cars. 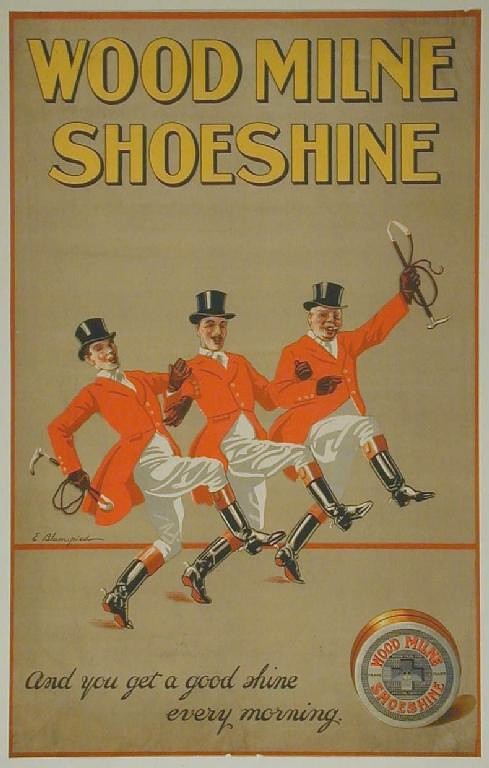 Notes: These line drawings for Ciro Pearls appeared in successive issues of Hutchinson's Magazine, which also published Blampied's illustrations for stories. The advert on the left below has been seen in an issue of The Passing Show of 12th February 1921 (vol 12, issue 309, page 512). The adverts may well have been printed in other magazines at the same time that have not been found.

The drawings illustrated here are scans of poor quality photocopies. 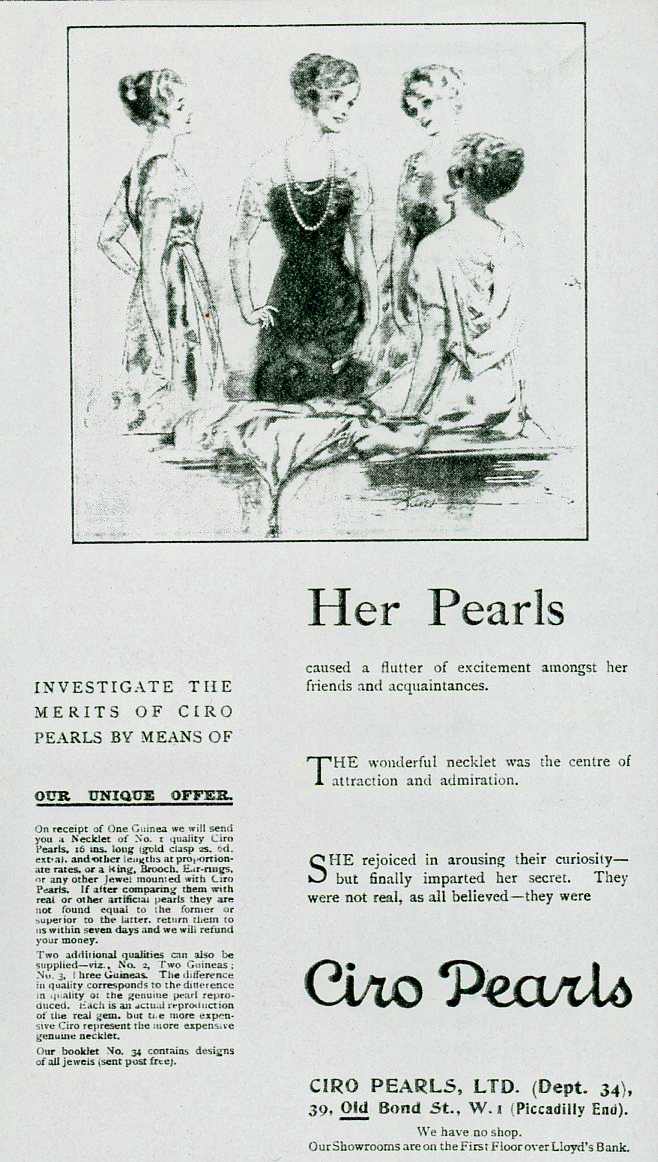 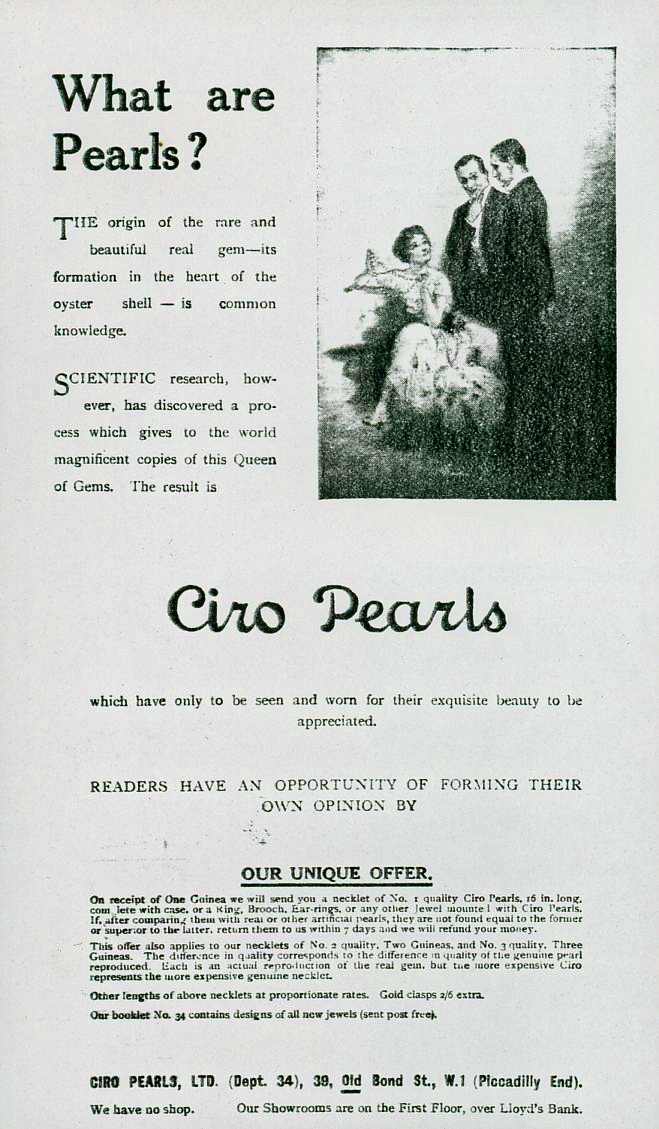 Notes: This drawing was owned by the Scottish etcher E.S. Lumsden. The Société Jersiase own a letter sent to Blampied by Lumsden in 1922:

Your drawing just arrived for which I am really very indebted to you at such a small price. I am not flattering you when I say I think it is one of the finest pen drawings I have ever seen of any time. It has quite taken the wind out of me Damn you! However it will be an incentive to carry on & do better myself. I don't know how you can get a pen to do such clean delicate lines in the profiles. My wife is tremendously impressed by it & very pleased that I have got it. I hope to get more some day. It is a great work and I am very proud to possess it.

Yours ever, E S Lumsden 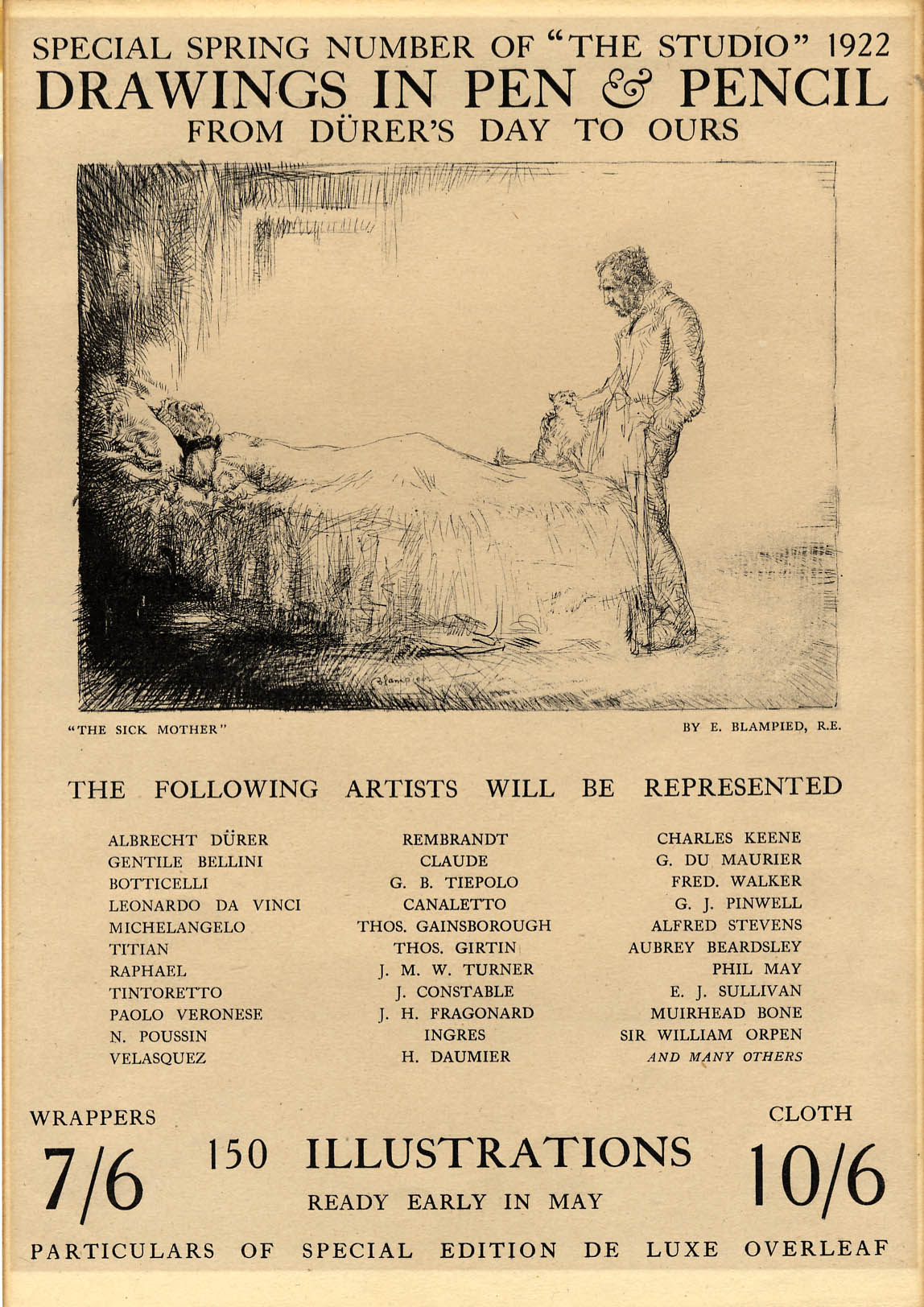 Publisher: The Sphere and The Tatler

Notes: A book on art in advertising reported that Blampied had drawn and advertisement for Pears soap and this is presumably it. Rather underwhelming given Blampied's ability to draw pretty young women in colour. 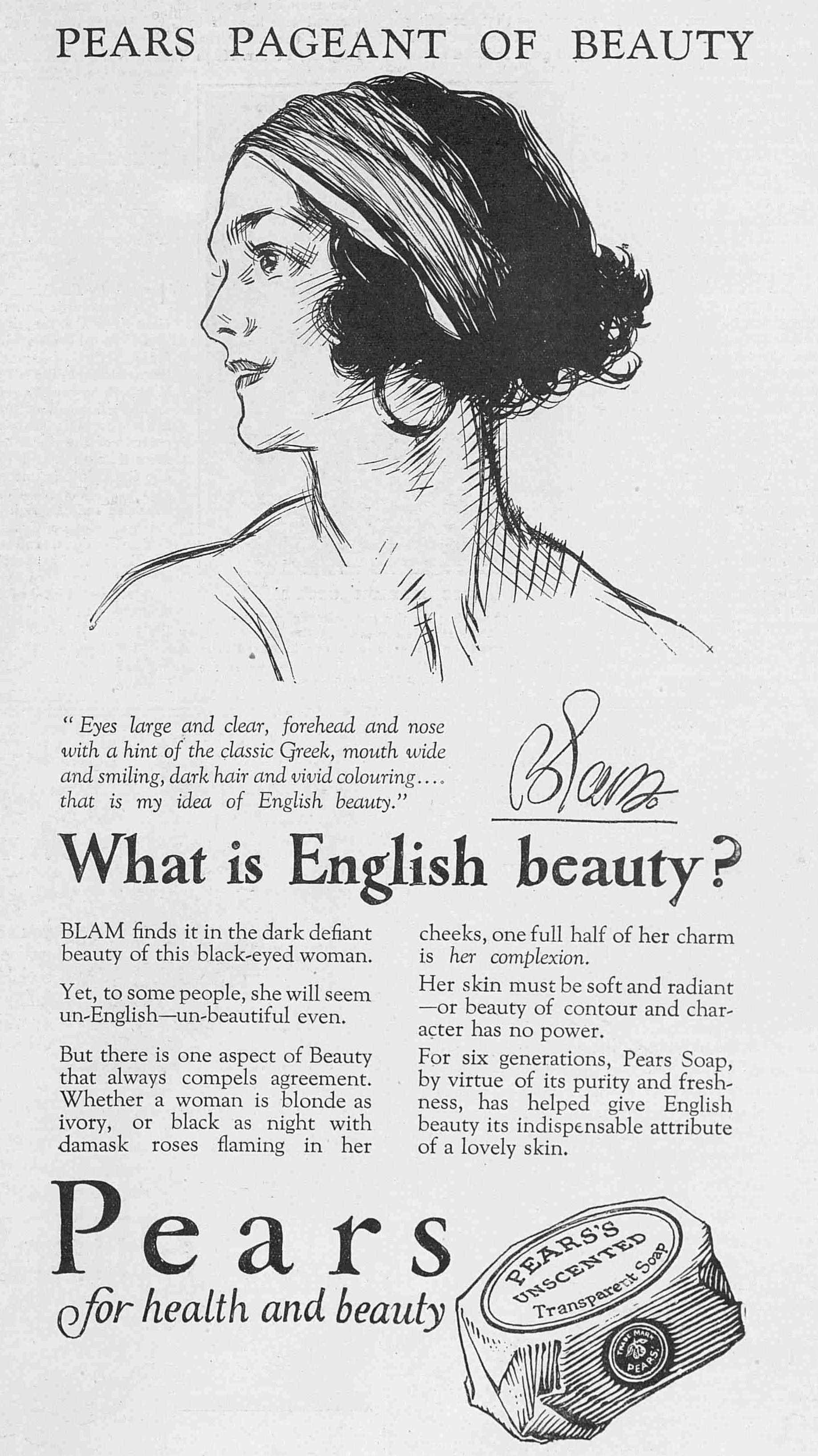 Drawing in a copy of The Tatler (click to enlarge)

Advertising? The Scent of Fair Fragrance

Notes: This original drawing in pen, ink and watercolours looks as if it was commissioned to advertise a perfume. The aspect ratio indicates that it was designed to be printed on the page of a magazine and the space at the bottom may have been left for text to be added. It is meticulously drawn in very fine detail, so it was a significant commission. No advertising material using this image has been found, so perhaps it wasn't ever used. I think it is from the 1930s, but it could be as early as 1925.

I bought it in mixed lot of four pictures in a sale in 2011 in which it was described as a 'poster'. I think it was from the estate of a descendant of Frank Cowling, as other items by Blampied in the same sale were inscribed to him, and I have a Christmas card that John Blampied sent to Cowling. If you know anything about Mr Cowling, I would like to hear from you. 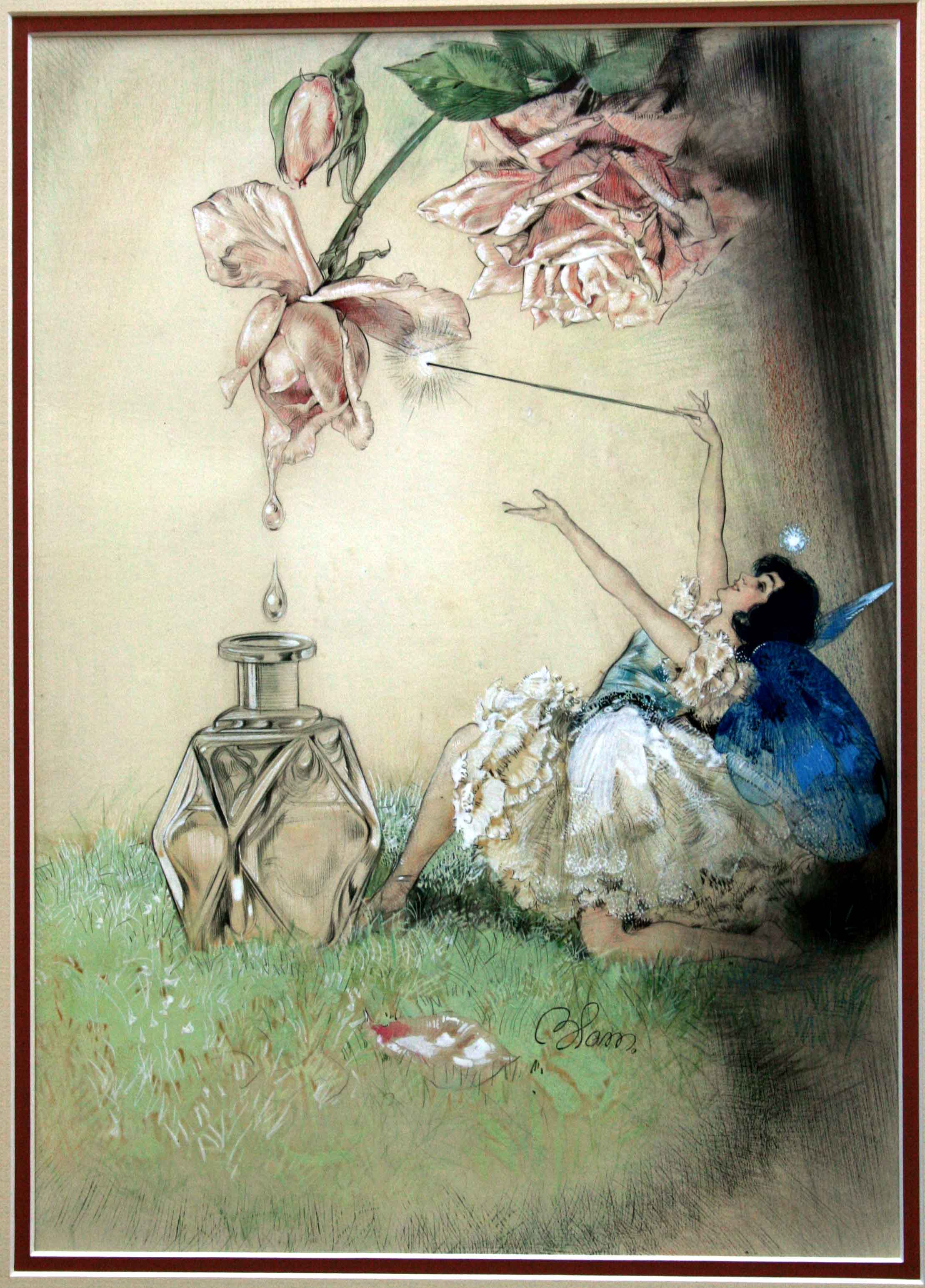