Edmund Blampied was asked to design stamps for the Island of Jersey during the German Occupation, which lasted from June 1940 to May 1945. It was the second set of stamps: two had been issued for use from 1941-1943, designed by Major N.V.L. Rybot and printed by the Jersey Evening Post. Blampied's six stamps, first issued in May and June 1943, are called the Pictorial Issue and were printed in Paris. Blampied also provided a design for a stamp issued in 1948 to celebrate the Liberation of the Channel Islands, and a design for a regional stamp, which was issued in 1964. The Stanley Gibbons (SG) catalogue numbers are given to identify them. 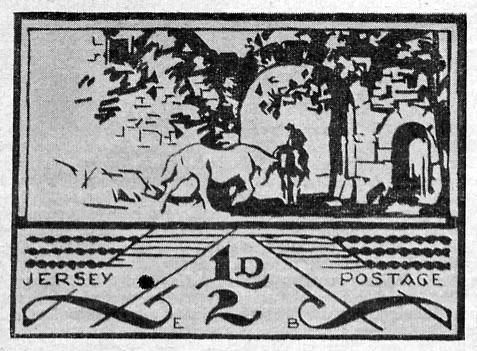 Reproduction in monochrome of Blampied's 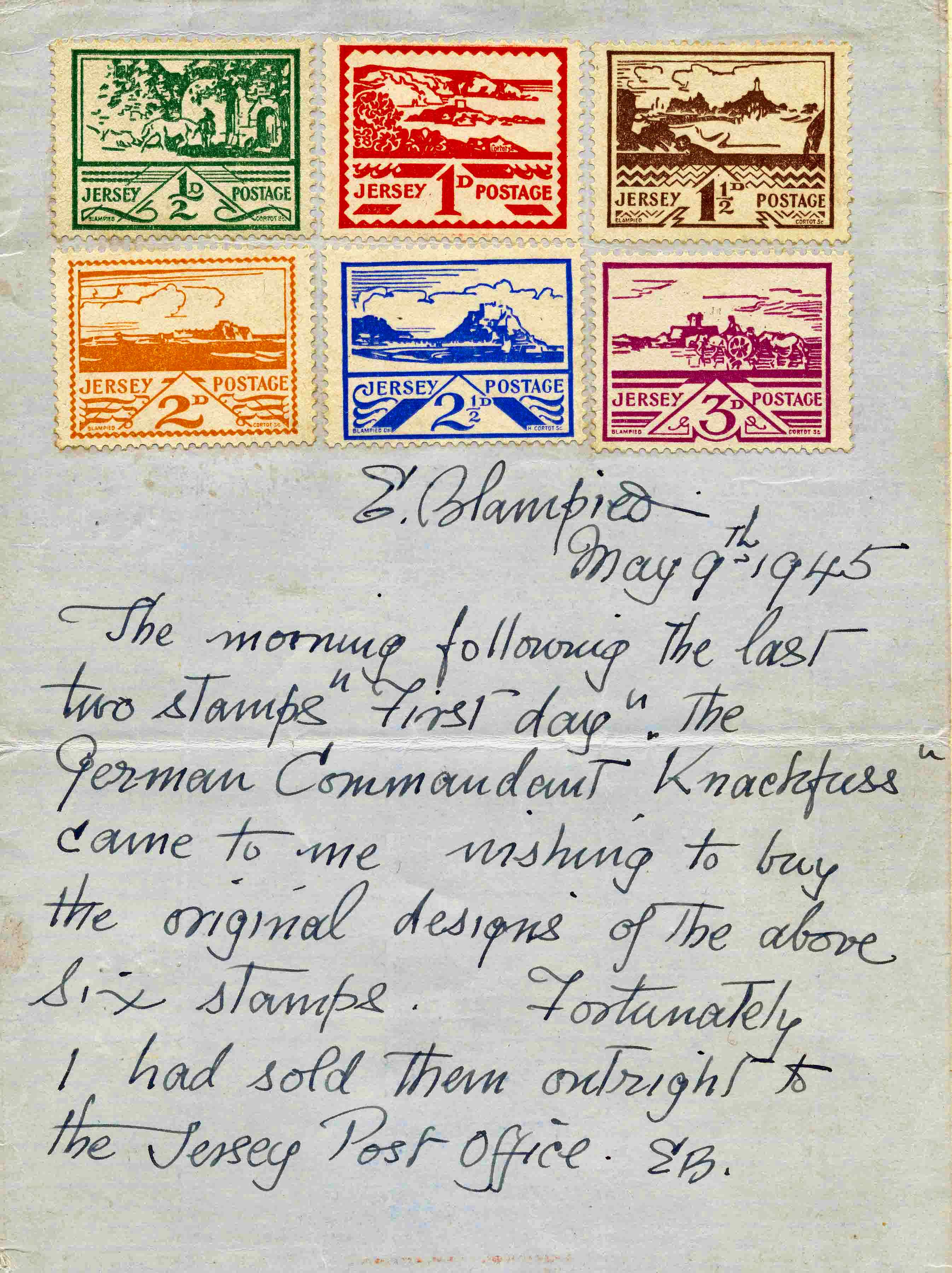 Note written by Blampied about the stamps.

Blampied designed six stamps in the style of woodcuts. According to a letter sent by Blampied in 1945 to his American patron, Harold Baily, the Germans chose four of the subjects and he chose the subjects for the ½D and 3D stamps, the only two which are not specific places. He was paid £60 by the Jersey Post Office, which had not issued stamps before the war, because British stamps were used on the island. They were no longer available because of the German Occupation, so new stamps were needed. Suitable paper and gum arabic were scarce in Jersey (Baker, 1949) so Blampied's designs were modified and engraved as stamps by Henri Cortot, who worked for the Atelier des Fabrication des Timbres-Postes in Paris, where the stamps were printed.

Click on the thumbnail to see the sheets of stamps then press the back button to return to the page.


Table. The dates on which sheets of stamps were printed. These dates can be found in the lower right corner of each sheet. See Baker (1949).

The highest denomination stamp is notable for the cypher 'G R' either side of the value, 3D. This stands for George Rex, the King at that time, who was also King in the right of legislature in Jersey, and the Duke of Normandy. The Channel Islands are the last part of the former Duchy of Normandy to remain under the rule of the British monarch. The rest of it was given up in the Treaty of Paris in 1259. This small symbol of allegiance to the King was presumably not noticed by the German authorities.

These stamps are unusual in that both the artist and the engraver are named. On all stamps except the 1D the name BLAMPIED appears in the lower left corner of the design and CORTOT Sc in the lower right corner. 'Sc' is an abbreviation of the Latin sculpsit, meaning 'he engraved it'. On the 1D stamp the initials EB are engraved in the scene, lower left, and Cortot Sc in the rock, lower right. According to an article by O.W. Newport in the magazine Stamp Collecting (1959), Blampied had originally added his initials either side of the stamp's value (see above) and used small lettering, but this was changed by Cortot, who perhaps added his own name to add balance to the stamps.

A total of 3,120,000 of these stamps were printed and sold between 1st June 1943, when the first two stamps were issued, and 14th April 1946, when they were no longer valid for use as postage stamps. They had a face value of £21,750. During the Occupation they could only be used to send letters within the Channel Islands and mostly within Jersey, as there was no postal service to the U.K. other than Red Cross messages (which did not need stamps), or they were added as souvenirs by German soldiers to their letters and cards, which applied German stamps. The population of Jersey during the Occupation was only about 35,000, so many people probably bought the stamps in the hope that they would be valuable after the war.

FelsKommandant Carl Friedrich Knackfuss (1887-1945), named by Blampied underneath the stamps above, was the German Administrator of Civil Affairs between 18th October 1941 and 19th May 1944. He is reported to have left Jersey in 1944 to face court-martial over his anti-Nazi behaviour, his opposition to orders issued by superior officers, and 'defeatist remarks'. In January 1942 Knackfuss had argued to his superiors against the deportation of non-indigenous people because they acted as a shield to prevent attacks by the British and could be used to retaliate against any measures by the Allies against the Germans. The claim of his court martial is not always supported (see the link immediately above) because an evaluation in early 1944 described him as Bewährter Feldkdt., der sich voll und ganz einsetzt (Proven field officer, who is fully committed.) He died aged 58 in a prisoner of war camp in Vršac in Yugoslavia (now in Serbia) on 7th October 1945 (Ramsey, 1981).

First day cover of the 2½D and 3D stamps, signed and dated by Blampied on the date of issue 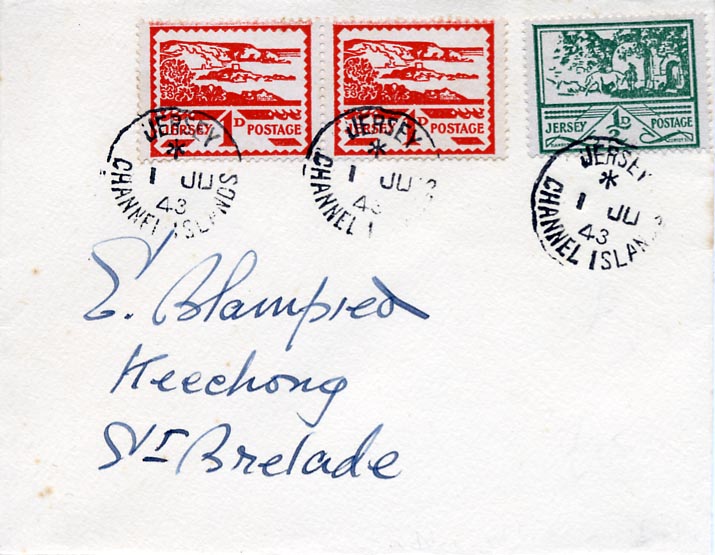 In 1993 the Jersey Post Office issued stamps to commemorate stamps on the 50th anniversary of the issue of the Pictorial Issue of stamps. They also applied the name of the designer and the printer, and the stamps were printed in France. 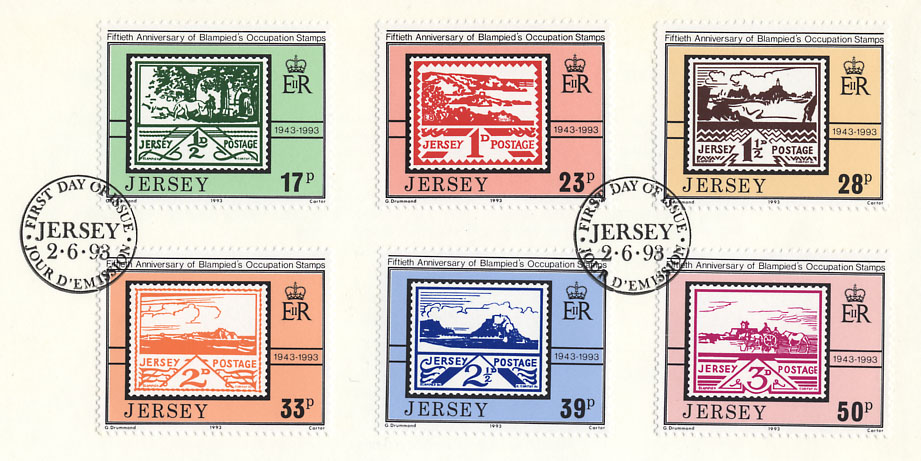 Both stamps depict the collection of vraic from a beach for use as a fertiliser, a practice that was dying out, even then. Bakers' Handbook of Stamps of the Channel Islands (5th edn, 1949) describes the stamps as the muck-cart issue. Blampied called this bucolic scene his signature tune, which he depicted in many of his drypoints and paintings. Blampied had used a very similar design for a drypoint commissioned in 1936 by the American College Society of Print Collectors called 'Seaweed harvest, Jersey' [Arnold & Appleby 181; Hall E36.1].

Blampied's designs, including the design that was actually approved are in the U.K. Postal Museum. A design can be seen in the collection of Jersey Heritage. Blampied also submitted a design of an unfurling Union Flag which was rejected, partly because the flag was upside down. But that element of allegiance to Britain and relief from oppression was not captured in the drawing of collecting seaweed, and his preferred design is actually depicted on the 1/6D stamp issued on 9th May 1970 to celebrate the 25th anniversary of the Liberation (see below, SG Jersey 37). Jersey had established their own independent postal service on 1st October 1969, so gained control of the design of their own stamps.

When the stamps were issued the letters pages of the Jersey Evening Post were filled with complaints about the inappropriate subject of the designs and about the fact that the cart wheel on the 2½ D stamp designed by Blampied had only 8 spokes whereas Jersey vraic carts had 12 spokes. In the other stamp, which had a very similar design by J.R.R. Stobie, a staff artist with Harrison and Sons the stamp printers, the cart has 12 spokes. Blampied's design had been modified by the British postal authorities.

These stamps were intended for use in the Channel Islands but were also valid in the U.K. and were sold at the eight head post offices, so were British stamps. A total of 5,398,000 of the 2½ d stamps were sold and 5,934,000 1d stamps. The stamps were unique in two ways: they were the first stamps for all the Channel Islands, and they were the first British stamps to have a pictorial design (Matheson, 1997). 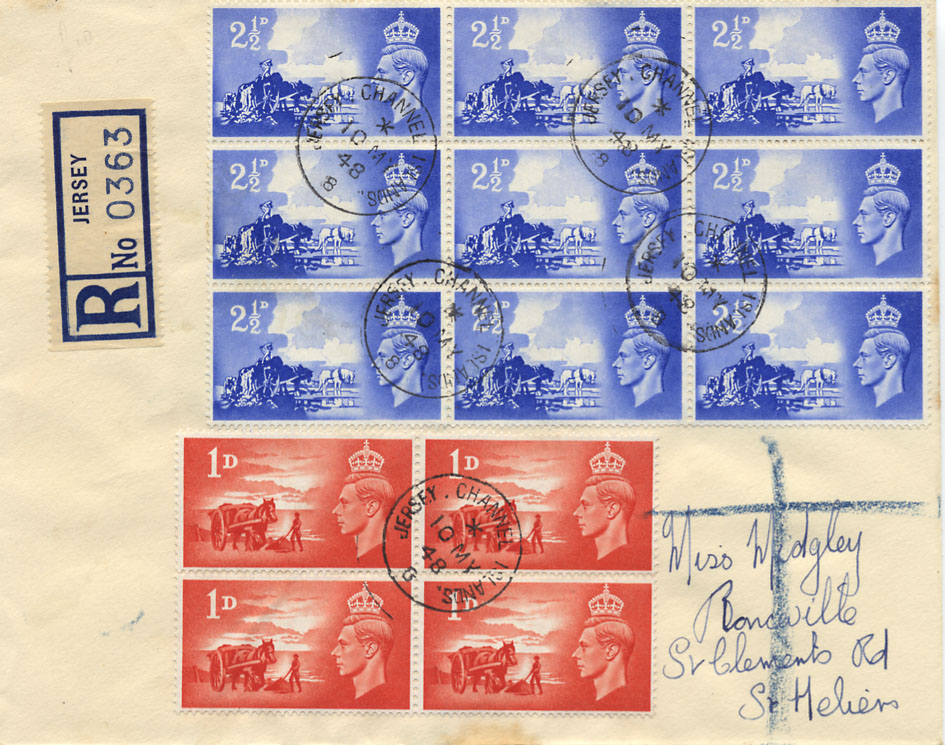 This was one of two stamps (the other was for 3D) issued specifically for use in the Channel Islands and the Isle of Man, but were initially valid throughout the U.K. Blampied had submitted a design showing the Royal Mace of the States of Jersey, the Royal cypher and the coat of arms of Jersey, for a regional stamp in 1956 (Newport, 1959). It was modified for use in this stamp. The proofs at the U.K. Postal Archive are currently credited only to Dorothy Wilding, whose portrait of Queen Elizabeth was used on the stamps. The stamps were replaced in Jersey on 1st October 1969 when the island started to issue its own stamps. A total of 4,770,000 stamps were sold. 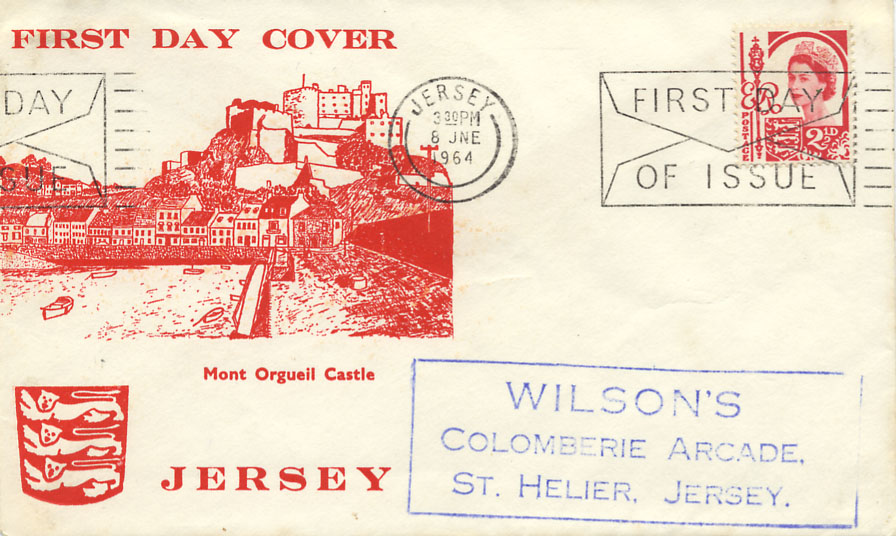 Ramsay, W.G. (1981). The War in the Channel Islands. Then and Now. London: Battle of Britain Press International Limited.