The art of Edmund Blampied in museums and galleries


Edmund Blampied was first and foremost an artist. He received no lessons in art while at primary school and it wasn't until some of his drawings were seen by the owner of a local private art school in St. Helier in Jersey when he was 15 that he was given some lessons and introduced to watercolours. In 1903 at the age of 17 years, Blampied left Jersey for the first time in his life to study at the Lambeth School of Art in London for a year, sponsored by a local businessman and supported by his family. He then won a London County Council Scholarship which paid his fees for two years, he found a job in the Art Department of The Daily Chronicle a major national daily newspaper, and he began his love-hate relationship with London. He remained there, except for 3 years during World War 1, until 1938. You can read more about his life in my biography Edmund Blampied, an Illustrated Life (Jersey Heritage Trust, 2010).

I have found examples of the work of Edmund Blampied listed in the collections of 131 museums, art galleries or institutions: 85 in the USA, 26 in the UK, six in Australia, four in New Zealand, two each in the Netherlands and Canada, one in Israel, plus five in Jersey. If you know of others, please let me know. Some of these collections are extensive. Most items are prints, but some institutions have an oil painting, a watercolour or drawings. I have provided links to the major collections, direct to the works by Blampied if possible, usually through a collection search engine, and I have given links to specific examples that are worth seeing. Each link opens a new browser window. I have tested the links, but if they don't work, let me know. 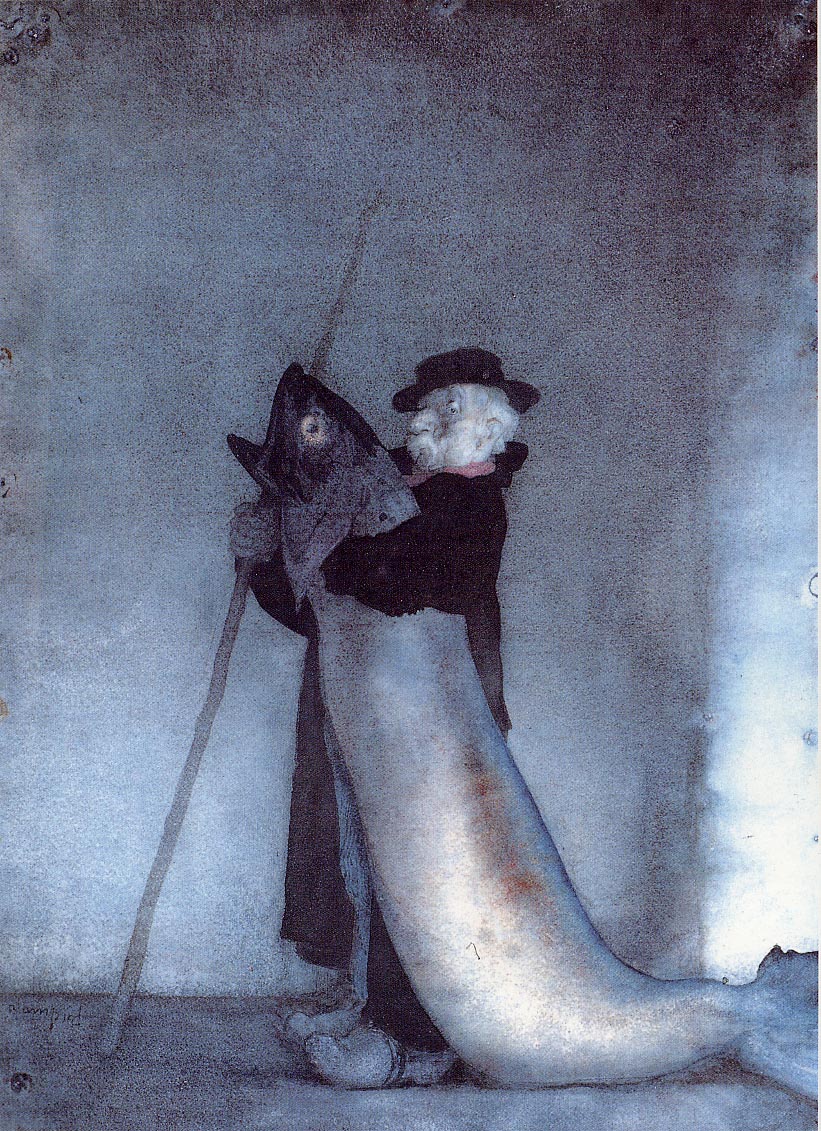 That man with a fish sold in 1929 to Lord Forteviot.


Jersey Heritage Trust has about 900 items related to Blampied including etchings, drypoints, lithographs, pencil drawings, sketches, watercolours, printed illustrations, stamps, printing blocks, and bank notes. Not all items are illustrated, the images are small, and the indexing of items is inconsistent. For example if I enter the search term 'Edmund Blampied' here for 'Museum and Art' I get 26 results; if I enter 'Blampied, Edmund' I get 906 results. The option to 'Search within results' doesn't work. To find what you want it is necessary to go through each of the 46 pages. Some of the highlights of the collection are:

The Boston Public Library (BPL) has the largest collection of the art of Edmund Blampied outside Jersey - 395 prints, drawings, silhouettes, watercolours and cards. Most of the drawings were given to the Library in 1941 by Albert H. Wiggin (1868-1951), a banker who made a great deal of money in 1929 short-selling his shares in his own bank before the Wall Street Crash while recommending that people buy them. He visited Blampied's studio in London in August 1933 and bought five sketch books of drawings of Tunisia, Sables d'Ollone, Holland and from imagination. Many of the drawings from imagination were preliminary sketches for prints or were drawings with the same composition as a print. Mr. Wiggin also owned seven of the eight original illustrations by Blampied for Travels with a Donkey by R.L. Stevenson, but probably purchased them from the Schwartz Gallery in New York in 1933, perhaps after he had visited Blampied's studio. The purchase by Mr Wiggin was, I think, Blampied's biggest single sale ever, in a period when the market for prints had collapsed so Blampied's income had diminished. Blampied was unaware of Mr. Wiggin's past. These drawings were added to several early and rare prints by Blampied, which had been bought for the Library by Arthur Heintzelman (1891-1965), an American etcher and the first Curator of Prints at the BPL. Blampied also donated some drawings and his silhouettes to the Library, through Harold Baily. All these items can now be seen on the Digital Commonwealth web site which is truly excellent, because the pictures can be enlarged and studied in detail.

The Cleveland Museum of Art has 116 items by Blampied: 98 etchings or drypoints, 10 lithographs and 10 drawings. The museum held a large exhibition of Blampied's work in 1941 and issued to the Print Club of Cleveland Blampied's last print before the Second World War, an etching called A Jersey vraic cart, in an edition of 250 proofs plus 10 for the artist. The Museum also holds:

The Philadelphia Museum of Art has 107 prints by Blampied, many of which were given by William S. Pilling in 1933 as a part of a collection of 2,500, mostly British, prints. Several prints are present in duplicate, including:

Lehigh University Art Gallery in Bethlehem, Pennsylvania has a collection of 69 prints by Blampied and four watercolours, here. Lehigh University is a private research university established in 1865. It is 65 miles north of Philadelphia. Their collection includes:

The British Museum has 74 prints by Blampied, but no images are available. Many of the prints were given by Campbell Dodgson, who was Curator of Prints at the Museum and published the first catalogue raisonné of Blampied's prints in 1926. Some prints were given by Ian Strang, who was Blampied's printer, including a proof of The Knacker. The Museum has proofs of Tarascon and Washerwomen at Annecy, which are rare. The contrast between the British Museum and all the American collections listed here, where images of their collection can be viewed, is notable.


The Fine Arts Museum of San Francisco was one of the first American museums to make their collections visible online. They used to be available at high resolution, but no longer, sadly. They have 57 prints in their collection and a watercolour.

The Mead Art Museum at Amherst College in Massachusetts has 54 works by Blampied including a proof of Driving home in the rain. Some items were given by Harold Baily's wife, including a watercolour portrait of Baily which Blampied did from photographs. Harold James Baily (1887-1964) was an alumnus of the college and had a very large collection of Blampied's work, most of which was sold by his wife before she moved into a home in the early 1980s. The Baily's visited Blampied in London in August 1937 and in Jersey after the War, in 1957. The Mead Art Museum has a few notable items:

The University of Saint Joseph Art Museum in West Hartford, Connecticut has 39 items by Blampied, including 36 prints. The prints include a proof of Driving home in the rain and The Bullock Cart. Most of the items were bequeathed by a Catholic priest named John J. Kelly. The collection includes:

Denison University Art Galley, Granville, Ohio has 37 prints, one of which is a lithograph, and in May 2021 added an excellent online catalogue with images that allow magnification. All of the prints were designed before 1928 and most have the same accession date, so were probably given as a collection. I suspect that the owner stopped collecting Blampied's work after the Wall Street Crash of 1929.


Herbert F Johnson Museum of Art at Cornell University, Ithaca, New York has 35 prints by Blampied, including a proof of Driving home in the rain, all of which have been scanned and can be enlarged.

Nelson Atkins Museum of Art in Kansas City, Missouri, has 30 works by Blampied including a proof of Driving home in the rain.


Cincinatti Art Museum has 28 works by Blampied, including:

Williams College Museum of Art has 26 works by Blampied including a pen and ink drawing of Three men dated 1921, perhaps from his first show in the USA.


The Detroit Institute of Art has 22 prints by Blampied and a drawing. The notable items in the collection are:

Bowdoin College Museum of Art in Brunswick, Maine has 20 prints by Blampied, most of which were given by Susan Dwight Bliss (1882-1966).


The Museum of New Zealand in Wellington has 18 prints by Blampied including a proof of Driving home in the rain.


Princeton Art Museum in New Jersey has 16 prints and two watercolours by Blampied.


The Victoria and Albert Museum, which is a British public collection funded by the U.K. tax payer, has a set of Blampied's silhouettes, nine lithographs, two drypoints, an etching and, I thought, two watercolour drawings and one in pen and ink. None of them have images. One of the watercolours is called 'Camels at a well' (see Syvret, 1986, p 83) and is the same design but in reverse of the drypoint of the same title. It was bought by the Museum at the recommendation of Martin Hardie, who was Keeper of Prints and Drawings from 1921 to 1935. He visited Blampied's studio to see his drawings of Tunisia on 21st July 1927, according to a note in Blampied's diary, and bought two pictures. The second was a drawing in pen and ink of 'The Approach to Monastir' (see Syvret, 1986, p78) Sadly it is not possible for the V&A to display an image of this picture on their web site because the rights to reproduce images belong to the Bridgeman Art Library. I think that's shameful.

The V&A also had a watercolour drawing given by Blampied from his 'Nonsense Show' of 1931 entitled 'Gad, Madam, your features are uncommonly familiar; weren’t you married to me once?'. I saw it there several years ago, but this picture is no longer listed in the V&A catalogue. I am trying to find out what happened to it.


The Wriston Art Center at Lawrence University in Appleton, Wisconsin has 14 pictures by Blampied (on public Jstor) including 8 prints, two late oil paintings (one called 'Close to the farm' and one called 'Jersey low tide' ), a watercolour, and three drawings, one of which is a self-portrait dated 1961.


The Delaware Art Museum has 12 prints by Blampied, all of which are illustrated including proofs of Driving home in the rain, A Jersey kitchen and Galloping.


The Warner Memorial Library at Eastern University, has put their collection of seven prints by Blampied onto their Flikr account, including a proof of a very rare print called In a meadow.


The Art Institute of Chicago has a drypoint called The Carousal and the watercolour drawing of a design for The Carousal.


The Courtauld Institute of Art has a single drawing by Blampied called Loading the cart which was shown at Blampied's first exhibition of drawings in London, held at the Leicester Galleries in 1923.


The following is a list of all the other institutions that hold the work of Edmund Blampied with the number of items in parentheses with links to an image, if available as a link. The numbers may be wrong as not everything has been seen and many items are not illustrated. As a general rule British art galleries do not have images of prints on line whereas most American collections do. However the links may not always work if collections are moved on-line or reorganised. If a link doesn't work, please let me know.